As I sit staring at my backyard where several leaves have the nerve to change colors already - I have good news.

My Disney Channel movie (no, not High School Musical: The Musical) is in pre-production, which for any non-film folks out there means the director and his minions of hard-working crew folk are on location in Utah gearing up for the actual shoot which will happen starting mid-October.

WOW! I'm very excited that this idea I had over 10 years ago is now (numerous rewrites later) actually getting made. Sadly, the title DADNAPPED has to change and I'm resigned to it, though have no good alternative title yet.

They might still need extras - so if you're in Utah, check it out!

On the writing front: I've just sent my amazing agent Jill Grinberg five chapters of something "new" and top secret! I value her input and hope to be able to tell everyone about it soon.

And - I'm gearing up for my big Texas trip, which is also scheduled for mid-October. I'll be visiting the CyFair school district for two solid weeks of author-silliness, and with the exception of missing my family, it promises to be a blast!

More on that later...
Posted by SilberBook-Blog at 5:14 PM

Once you've got a new title, let us know...cuz I'll be waiting to watch it!

(Personally, I do find Dadnapped very intriguing. But I'm no stranger to changing titles.)

Thanks Jay! I'm afraid if the title doesn't just pop into my head while showering, I am lousy at conjuring them up - and end up taking really really long showers, which pretty much destroys our water bill!

Guess what? I JUST got back from an audition for a part in DADNAPPED. My mom and I found your blog and I wanted to send you a message. I LOVE DADNAPPED and hope I get to be in it!!!!!!!!!! YOU ROCK and so do your stories!!!!!!!

Wow Laney - that's pretty cool. Good luck and I'll keep my fingers crossed for you! Auditioning is a tough process (but I'm sure you know that) - no matter what happens never give up your dreams!

ps: what part was it?

I auditioned for Audrey. It's a really cool part.

Hi Alan.
I also auditioned for the role of Audrey so please keep your fingers crossed for Laney & me.
Abigail.

P.S. I loved the scene where Audrey is in the ballroom -- genius, pure genius.

Thanks Abigail - I have fingers crossed on both hands for the two of you!

Any news if the role of Audrey has been cast? I sent in a DVD audition and was just wondering.

My daughter sent in an aud. tape, but I thought the script was really cute! Can't wait to sit and watch it with my kids!

Hey Anonymous (1) - I haven't heard any news about casting, but as the "writer" I'm usually the last to know. and Anonymous (2) - thanks for the kind words, I hope it's a wonderful family movie that we all can enjoy!

So do you know when a complete cast list will be posted?

Anonymous - sorry to say that I've heard nothing about any of the casting. But when I know anything - I'll be happy to share it!

I bet you are excited/nervous with you movie starting to film soon. Good luck. I can't wait to watch it.

Did Audrey become Andre? If so, how did you feel about that change?

Hi. I did hear that Audrey became Andre and though I was disappointed at first - because I liked having a little girl in the mix - I know the choice was made by people who know exactly how to make the best movie possible!

can't wait to see how it all ends up! 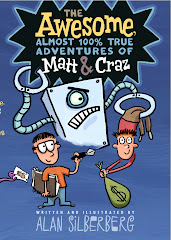 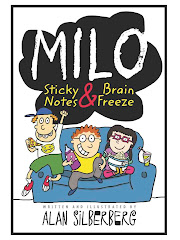 SilberBook-Blog
I write stuff. TV shows, movies, and my first novel for kids, POND SCUM. I was the lucky recipient of the 2008 Thurber House Children's Author in Residence. MILO: STICKY NOTES and BRAIN FREEZE won the 2011 Sid Fleischman Humor Award and the QWF Award for Children's Literature. And my new book, THE AWESOME ALMOST 100% TRUE ADVENTURES OF MATT and CRAZ is awesome!